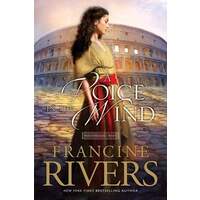 Acclaimed, Award Winning author Francine Rivers has an amazing ability to draw you into the novel you are reading, as if you are right there with the characters in the story.

A Voice in the Wind is the 1st Book in the Mark Of The Lion Series, set in the first century. Join Hadassah, a young slave girl as she clings to her faith in the living God for deliverance from the forces of decadent Rome. Once you start reading you won't want to put the book down till you have read the last page.

Description: This classic series has already inspired nearly 2 million readers, but both loyal fans and new readers will want this 20th anniversary edition of a Christian classic, which includes a foreword from the publisher, a letter from and Q & A with Francine Rivers, color map, an illustrated glossary, and discussion questions suitable for personal and group use.

The first book in the bestselling Mark of the Lion series, A Voice in the Wind brings readers back to the first century and introduces them to a character they will never forget—Hadassah. Torn by her love for a handsome aristocrat, this young slave girl clings to her faith in the living God for deliverance from the forces of decadent Rome. If you have read this book already we would love to hear from you, simply comment on this post or leave some feedback on our feedback form with what you thought of it. Better still, why not join the ALC Bookchat Club by clicking on the Login Icon at the top right of the screen, then type in your e-mail address and password of your choice and then click "sign up". Once you have joined the club you can chat with other members or join a group and discuss all you favorite Christian books. To chat after you have joined, just click on the chat button on the bottom right of your screen and then click new chat. In the pop up, type in the name of the member you want to chat with and then type them a message and press the little paper plane send icon on the right to send message. You can also join a discussion group by hovering the cursor over the word "More" on the tool bar at the top of the screen, scroll down to the word "Groups" and click on it. When the new screen pops up click on the word "Join" to join the group for discussion. Join today and enjoy chatting about all your favorite Christian Books.