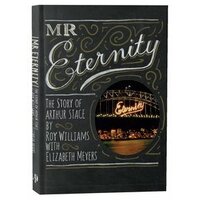 This is a great book, telling the story of an Australian man who had a passion to tell people about the Lord Jesus Christ and... that there is an eternity awaiting every person who has ever lived and is alive on this planet right now! Question - Where will you spend Eternity?

Description: Almost every day for 35 years, Arthur Stace spent hours writing a single word – Eternity – on and around the streets of Sydney. Sometimes his mission took him much further afield, to country New South Wales and even to Melbourne.

Stace’s identity was a mystery for more than two decades. Then, after his ‘unmasking’ in 1956, he became a reluctant folk hero. By the time he died, in 1967, his was a household name and the word Eternity was ingrained in the soul of Sydney. It still is.

In this long-awaited biography, the full story of Arthur Stace’s life is told for the first time in vivid and often surprising detail. Drawing upon many original sources, some never before made public, this book will engross Christians and non-believers alike – anyone who loves a great Australian story.

About The Authors: Roy Williams won the Sydney University Medal in law in 1986 and spent 20 years in the legal profession before turning his hand to writing. His first and best-known book, God, Actually (2008), was a defence of Christianity for the educated layperson. A bestseller in Australia on release, it has since been published in Britain and North America. Roy’s next two books – In God They Trust? (2013) and Post-God Nation? (2015) – focused on Australian history and society, and have been widely praised by believers and agnostics alike. Mr Eternity is his first full-length biography.

Elizabeth Meyers’ father, Lisle Thompson, was the minister of Burton Street Baptist Tabernacle in Darlinghurst from 1951 to 1964 and also a dear friend and mentor of Arthur Stace. Elizabeth worked as a teacher for 26 years after attending Sydney Unversity and qualifying in early childhood/special education. She and her husband Lionel have two daughters and four grandchildren. Elizabeth has written this biography of Arthur Stace with Roy Williams to fulfil a promise to her mother, May, as Lisle Thompson received permission from Arthur to write his life story ‘only after his death.’

If you have read this book already we would love to hear from you, simply comment on this post or leave some feedback on our review form with what you thought of it. Better still, why not join the ALC Bookchat Club. Just Google alcbookchatclub.com, go into the website and click on the Login Icon at the top right of the screen, then type in your e-mail address and password of your choice and then click "sign up". Once you have joined the club you can chat with other members or join a group and discuss all you favorite Christian books. To chat after you have joined, just click on the chat button on the bottom right of your screen and then click new chat. In the pop up, type in the name of the member you want to chat with and then type them a message and press the little paper plane send icon on the right to send message. You can also join a discussion group by hovering the cursor over the word "More" on the tool bar at the top of the screen, scroll down to the word "Groups" and click on it. When the new screen pops up click on the word "Join" to join the group for discussion. Join today and enjoy chatting about all your favorite Christian Books.