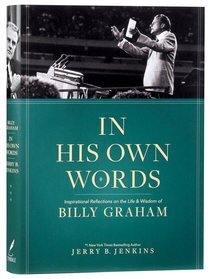 Description: Celebrate the incredible life, wisdom, and legacy of Billy Graham. Filled with timeless inspiration and beloved stories from the life of America's most celebrated evangelical leader, In His Own Words pays tribute to the life, lessons, and legacy of Billy Graham. Through his classic quotes, the Scriptures he loved most, and inspirational reflections from his trusted friend and writing partner, bestselling author Jerry Jenkins, you'll discover the true spirit and heart of this powerful man of faith-and how you can begin to build a foundation of such faith in your own life. A perfect gift for anyone whose life has been profoundly touched by the power and passion of Billy Graham, In His Own Words is a treasured tribute to this unforgettable man.
- Publisher

About The Author: Jerry B. Jenkins, former Vice President for Publishing and currently Writer-at-Large for the Moody Bible Institute of Chicago, is the author of more than 150 books, including the best-selling Left Behind series. Sixteen of his books have reached the New York Times best-seller list and have also appeared on the USA Today, Publishers Weekly and Wall Street Journal best-seller lists. Desecration, book #9 in the Left Behind series was the best-selling novel in America in 2001. Also the former editor of Moody Magazine, his writing has appeared in dozens of Christian periodicals.His non-fiction includes as-told-to biographies of such notable men as Bill Gaither. He helped Dr. Billy Graham with his memoirs, Just As I Am, also a New York Times best seller. Jerry owns Jenkins Entertainment, a filmmaking company in Los Angeles, which produced the critically-acclaimed movie Hometown Legend based on his book of the same name. Jerry Jenkins also owns the Christian Writers Guild, which aims to train tomorrow's professional Christian writers.Under Jerry's leadership, the Guild is steadily expanding its services to include a writers' advocacy centre, college credit courses, a critique service, literary registration services, and writing contests. As a marriage and family author and speaker, Jenkins has been a frequent guest on Dr. James Dobson's Focus On the Family radio program.Jerry and his wife Dianna have three grown sons and three grandchildren. Hope, Help And Healing For The Depressed