Description: A wealth of Biblical meditations from Spurgeon with applications that are relevant for contemporary Christians. Spurgeon's characteristically pithy comments hit home with a wit and elegance rarely found in other writing. Christians young and old will find his words challenging and stimulating. Complete and unabridged in a beautiful matt black edition. 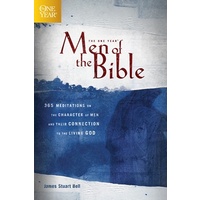 Men of the Bible (One Year Series) Walking With The Saviour The Fruit Of The Spirit

Fixing My Eyes on Jesus