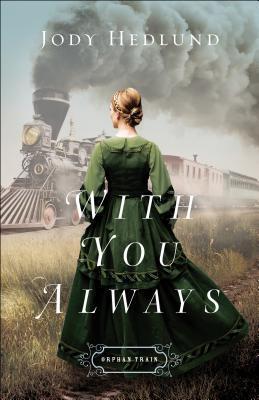 With You Always (#01 in Orphan Train Series)

Could Following the Opportunity of a Lifetime Cost Them the Love of Their Lives?

One of the many immigrants struggling to survive in 1850s New York, Elise Neumann knows she must take action to care for her younger sisters. She finds a glimmer of hope when the New York Children's Aid Society starts sending skilled workers to burgeoning towns out west. But the promise of the society's orphan trains is not all that it seems.

Born into elite New York society, Thornton Quincy possesses everything except the ability to step out from his brother's shadow. When their ailing father puts forth a unique challenge to determine who will inherit his railroad-building empire, Thornton finally sees his chance. The conditions to win? Be the first to build a sustainable community along the Illinois Central Railroad and find a suitable wife.

Thrown together against all odds, Elise and Thornton couldn't be from more different worlds. The spark that ignites between them is undeniable, but how can they let it grow when that means forfeiting everything they've been working toward?

"Christy Award-winner Hedlund crafts an enjoyable first installment of the Orphan Train Series. . . . Hedlund's Cinderella story, shedding light on the hardships women faced in both the East Coast cities and the developing West in the 1850s, is a pleasant romance with plenty of twists to keep readers engaged until the final page."--Publishers Weekly

"The first book in the Orphan Train series features a sweet yet intense romance that builds between a young woman devoted to truth and honor and a rich man just learning the reality that exists outside of his comfortable life. This title is engaging and heartening."--RT Book Reviews

"Hedlund has effectively captured the hopelessness, volatility, and uncertainty of the times in the first book in her Orphan Train series, a heart-stirring story of survival and love filled with memorable characters."--Booklist starred review

"This book is a powerful and historically grounded story about finding your own strength and worth through faith. It is a wonderful read for fans of Elizabeth Camden."--Christian Market

About The Author: Jody Hedlund (www.jodyhedlund.com) is the author of over 20 novels, including Love Unexpected, Captured by Love, Unending Devotion, The Preacher's Bride, and A Noble Groom, and is the winner of numerous awards, including the Christy, Carol, and Christian Book Award. She received a bachelor's degree from Taylor University and a master's from the University of Wisconsin, both in social work. She lives in Michigan with her husband and five children. She loves hearing from readers on Facebook and on her blog. Ladies of Intrigue 3in1: A Gentleman Smuggler's La Home All Along (#03 in Amish Secrets Novel Series)