Description: There is a very special place in the jungle that is exactly half way between the Northern Hemisphere and the Southern Hemisphere; this place is called the Equator. In this Jungle Doctor Picture Fable, Toto the monkey decides to cross the equator and go north. Will being in the north change him or will he feel just the same?

About The Author: The late Dr. Paul White was a well-known Australian writer and medical missionary in Tanganyika. He developed comics from his Christian storybooks. THE JUNGLE DOCTOR comics are a series of jungle animal fables in cartoon form with Gospel messages for children. Each comic contains a complete, original parable and ends with a page explaining the spiritual application.They have been translated into 106 languages and have sold over 1 million copies worldwide. THE JUNGLE DOCTOR comics have been used in every setting, from Scripture classes to beach missions. Strike of the Shark The Upside Down Day 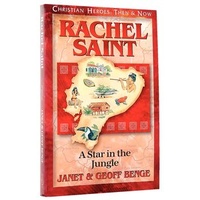 Rachel Saint - A Star In The Jungle Bullying (God, I Need to Talk to You About Series)